Michael Butts, an avid fly fisher, swimmer and outdoorsman, spent over 30 years working 12-hour days as a construction site manager, considered by many as a “legend” in his field. Always one to seek out a challenge, Michael studied and received more certifications than anyone else at his company. For years, working in the harsh outside elements never affected him until he noticed a new trend. Even after a long hot shower, he could not warm up after a long day out in the cold. He knew something was wrong. His wife encouraged him to see a doctor and with just one word – “cancer” – his life was forever changed.

Michael was diagnosed with an aggressive form of leukemia, acute myeloid leukemia (AML) and needed to begin treatment immediately. Michael felt compelled to get his work affairs in order before he could begin to process his diagnosis. The first thought that crossed his mind was, “I need to get my truck cleaned out.” After the initial shock faded away, he went into action mode. Michael’s physician referred him to Weill Cornell Medicine (WCM) and NewYork-Presbyterian (NYP) where he began treatment. 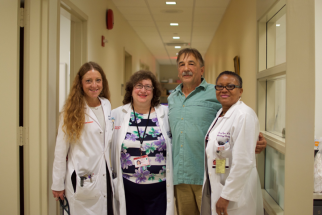 He smiles as he talks about Sandy Allen-Bard, a nurse practitioner in the Weill Cornell Leukemia Program who was the first person he met at the hospital. Even in light of the news of his diagnosis, Michael maintained his sense of humor and joked with Sandy – clad in colorful pants and a marathon runner – about how he’d keep his strength while in the hospital by chasing after her.

In April 2014, he received a stem cell transplant using donor cells from his sister who was a match. Michael shares that he now feels a much deeper connection with his sister because she gave him a gift that saved his life. As he underwent treatment, Michael’s team of doctors felt inspired by his sense of humor and genuine compassion.

“Nothing could get Michael down and I believe it was that mentality that got him to where he is today,” says Dr. Tsiporah Shore, Associate Director of the WCM/NYP Bone Marrow and Stem Cell Transplant Program.

When asked how he coped with his diagnosis and the side effects of treatment, Michael explains that his survival mode was dependent on tuning out the medical jargon. He quotes Albert Einstein, “don’t clog your mind with things you can look up.” Michael’s sense of humor and perspective never faltered throughout his five-month hospital stay.

Now, four years after his transplant, he says not much in his life has changed except for the one additional chemotherapy pill he takes each day. He also tries to maintain his distance when his grandchildren have a cold, as his immune system is not as strong as it used to be. No longer working 12-hour days frees up Michael’s life to be able to enjoy his hobbies and spend quality time with his wife, two children and grandchildren. On any given day, you’ll find him fly fishing, swimming and spraying garden hoses at his 11 and 14-year old grandkids (in warmer weather, of course). His spirit and passion for life have never been stronger and a day does not go by where he doesn’t feel grateful for his team of physicians at Weill Cornell Medicine and NewYork-Presbyterian.

“Four years later and I’m still here and that’s because of my wife, Dr. Shore, Jessy and

Sandy,” says Michael. Daily gratitude just wasn’t enough for Michael, so he said it with a tattoo.

Last summer, he walked into Graceland Tattoo Inc. in Wappinger Falls, NY on a mission to give thanks to the women who saved his life. The tattoo, displayed on his right calf, is of an orange ribbon representing blood cancer awareness and includes the names of his wife and healthcare team who treated him. He will forever be indebted to his team of doctors and nurses and he now has their names on the back of his leg as a permanent way of thanking them. “They’re part of my family now and that bond will never be broken.” He goes on to share some helpful advice, “You don’t want to get sick but if you do, the best thing you can do is get treated at Weill Cornell Medicine and NewYork-Presbyterian.”

Be The Match Donor Registry